Welcome to Section 5 of Symbols and Society. In Section 4, we studied Jung's idea that all humans share unconscious archetypes; these take form as symbols and myths. This week we will study Levi-Strauss's idea of structuralism. Levi-Strauss argues that there is an innate structure to human thought processes. This structure involves several basic sets of binary oppositions. Symbols, folktales, kinship, food mores etc. from all around the world incorporate and express these binary oppositions (Elms 1977: 259). Here is the overview of this week:

A good introduction to structural analysis can be obtained by reading Levi-Strauss's "Harelips and Twins" essay. If are time poor, please feel free to use my summary. Levi-Strauss sees that the hare (a kind of rabbit) is common feature in Indigenous American myths. The hare is usually a trickster and has super-powers. Levi-Strauss makes, for the first time, a connection between hares, people with hare-lips and twins. Twins embody contradictions (we could call these binaries) of good and bad, heaven and earth. Twins are actually a single body that divide into two in the womb. Any person with a hairlip was about split in two in the womb but didn't, therefore he/she embodies incredible opposite powers. Similarly any hare is animal that was about to split into but didn't, so any hare also embodies these opposite powers. So Levi-Strauss sees a symbol (the hare in Native Story) and it embodies dual characteristics of the culture. This also enables him to connect the hare with hare-lipped people and twins. This was supposed to be a great insight. It indicates that myths stories and symbols are actually manifestations of similar underlying structures which we are unaware of; these structures are usually organised in opposites (binaries).

First I want you to do my quick introduction to kinship. Get yourself a pen and piece of paper!

Then please read my summary of Levi-Strauss's analysis of the avuncular relationship. You should then be able to understand the structural significance of this: 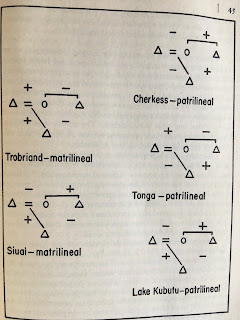 If you're having trouble understanding, the following presentation might help:
If you're still unclear, you'll need to read pp 41-51 of Structural Anthropology.

Hopefully the above examples provide a basic idea about how Levi-Strauss's structuralism works. Now we have to take it another level of complexity by introducing paradigmatic (synchronic, the order of things in a story, meal, ritual, sentence etc.) and syntagmatic (diachronic, the replace-ability, compatibility, or 'swap-ability' of these elements).

Here are my notes on syntagmatic and paradigmatic.

For another example of structural analysis, let's turn to Levi-Strauss's analysis of the elements of cuisine.

Consider a BBQ (“barbie” in Australia; "braii" in South Africa). What is consumed first? Second? Third? Maybe you start with potato chips (crisps); then it's cooked meat and salads; then afterwards you have cake, chocolate, or other sweet foods. This is the diachronic arrangement. (I don't want to confuse, but Levi-Strauss also calls this "paradigmatic relationship")

Now consider what is served together. For example, what goes with tomato sauce? Sausages. Also meat goes with salad. Cream goes with cake. This is the synchronic arrangement. (Again, I don't want to confuse, but Levi-Strauss also calls this "paradigmatic relationship". If these new terms are confusing just ignore them for the meantime.)

Finally, all these 'elements' (potato chips, meat, salads, cake, chocolate, salad, cream) are called gustemes. (Because, for Levi-Strauss they are like phonemes in a sentence)

These are the basics of Levi-Strauss's analysis of 1950s meals in England and France:

Like language, it seems to me, the cuisine of a society may be analyzed into constituent elements, which in this case we might call “gustemes,” and which may be organized according to certain structures of opposition and correlation.  We might then distinguish English cooking from French cooking by means of three oppositions: endogenous / exogenous (that is, national versus exotic ingredients); central/ peripheral (staple food versus its accompaniments) ; marked / not marked (that is, savory or bland). We should then be able to construct a chart, with + and — signs corresponding to the pertinent or nonpertinent character of each opposition in the system under consideration.

In other words, in English cuisine the main dishes of a meal are made from endogenous ingredients, prepared in a relatively bland fashion, and surrounded with more exotic accompaniments, in which all the differential values are strongly marked (for example, tea, fruitcake, orange marmalade, port wine). Conversely, in French cuisine the opposition endogenous / exogenous becomes very weak or disappears, and equally marked gustemes are combined together in a central as well as in a peripheral position.

... French cooking is diachronic (the same oppositions do not come into play in different parts of the meal). Thus French hors-d’oeuvres are built around the oppositions maximal transformation / minimal transformation of the type “ charcuterie” raw foods, which does not recur synchronically in subsequent dishes....There are, finally, certain incompatibilities which are consciously maintained by the social group and which possess a normative value: hot food / cold food; milky drink / alcoholic drink; fresh fruit / fermented fruit, etc.


Inspired by this analysis, I wrote an op-ed drawing on Levi-Strauss's insights to analyse Australian BBQs. (As a disclaimer, "Secret Men's Business" was not my title.) My op-ed shows how we can apply Levi-Strauss's ideas to other symbolic phenomena.

OK now let's see if you can apply this theory yourself. I spent a bit of living in the US as a kid. I found about  a special ritual meal on a holiday called "Thanksgiving", occurring annually on the 4th Thursday of November. As I recall this is what I was told about it:


Families get together on this Fall (Autumn) evening to eat, traditionally, Turkey, pumpkin and other dishes. Thanksgiving commemorates an occasion when 'American Indians' (now called First Nations) shared a meal with the European settlers (usually called Pilgrims). The food they shared with the Pilgrims was Turkey and various other American vegetables and fruits, so now every year we eat the same food.. Thanksgiving is a time to give thanks to the Indians for sharing their land with us, and to give thanks to God for this great land (i.e. USA).

Anyway, that's what I was told, back in the 1980s. Since then I've heard the ritual criticized for various reasons, but I'll leave those criticisms aside for now. Let's just focus on what a structural analysis could say about the following meal plan (i.e. menu!): 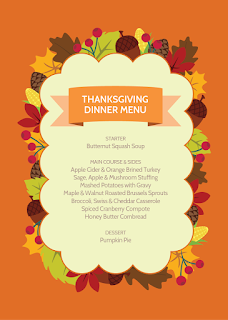 Think about such oppositions as sweet-sour; indigenous-exotic; main dish-sides; raw-cooked. Also keep in mind the difference between paradigmatic (synchronic) and syntagmatic (diachronic) elements. What is the paradigmatic structure of the culinary elements ('gustemes') of this Thanksgiving Meal? How about the syntagmatic structure? Remember, in the ritual context, the main course and sides are served, on the table, and eaten at the same time.

Get ready for reading...

Levi-Strauss's greatest essay is The Structural Study of Myth. It's a monster (figuratively and literally!) of an essay. When I first read it, this essay took me hours and hours to understand, and then it changed how I understood humans. In the essay, Levi-Strauss analyses Oedipus myth.

Before you read the essay helpful to brush up on the details of the entire myth/saga. This website should guide you through the larger Oedipus myth. It also relates elements directly to Levi-Strauss's structural analysis. In the same essay, Levi-Strauss also discusses Zuni myths--this website will help with those.

The Structural Study of Myth

OK now you're ready to read The Structural Study of Myth. This presentation is here to help:


Here are my notes from this presentation.

If you're still struggling with the structural analysis of myth, you can turn to Leach, one of the towering figures of 20th century anthropology. In one of the chapters of his book Claude Levi-Strauss, Leach took it upon himself to restate the entire argument of the "Structural Study of Myth". This indicates Leach was also a humble and generous man. It also indicates that Levi-Strauss is extremely important and difficult to read!


By now you should be able to understand this:

Levi-Strauss's analysis of the Oedipus myth clearly differs from Freud's analysis. But can you explain the underlying theories which give rise to such radically different interpretations? In spite of the differences, can you ascertain similarities?

But is Levi-Strauss right? Is he correct, in fact, correct to stress the role of opposites in cultures?

One way to respond to these questions is as follows: Anthropologists assume that the world is meaningless. Reality has no meaning, but for some reason (which Geertz goes into) we humans try to construct meaningful lives. In this regard, humans seem to be unique. Assuming that the world is random and not pre-organized meaningfully, Lévi-Strauss seeks to understand how we go about creating meaning. What patterns emerge when we look at human meaning-making? L-S comes up with this answer: one way that we make reality meaningful is through opposites. His writing is teeming with examples of opposites. My experience seems to confirm that opposites are a way of making meaning. Where I do fieldwork (East Java and the Cocos (Keeling) Islands), opposite such as day/night, raw/cooked, man/woman, black/white, inside/outside, good/bad are crucial in creating a meaningful life. Also (as far as I can remember— we’re going back as far as the 1980s here!!!) it seems to me that in places where I have lived (Australia, Japan, Russia, England, USA, Canada) these opposites were also fundamental. And the opposites produce meaning and behavior in different ways.  Anyway, this evidence supports Levi-Strauss’s observations.

Another way to respond is that, since the time of Levi-Strauss, anthropologists have been less concerned with proving truths about the world and more with developing systems for interpreting the world.  The emphasis (again using Geertz) is on interpretation rather than science. Whether that’s a good thing I’m unsure.

Levi- Strauss's structuralism claimed to unlock underlying patterns in rituals, meals, sentences, clothing, and various other phenomena. These patterns were not the observed surface meaning. However, underlying the surface meaning, deep structures could be observes. Furthermore in these structures meaning did not emerge from single to but only in the relationship between various terms following models like A is to B as C is to D. These ideas have profound implications not only for anthropology but for scholars of folktales and mythology and in the burgeoning field that was to become the discipline of Cultural Studies. Later Levi Strauss thought tidy structures do you need biological qualities of humans and our minds, but that is for further study. For our purposes, it is sufficient that you understand Levi-Strauss's ideas:
If you are still a little unsure about this, rest assured we will revise it next in Section 6: Evaluating Theories & Critical Thinking. Bur for now, the take-home message: the meaning of symbols is structured according to basic underlying units of meaning.

Posted by Nicholas Herriman at 23:21